My Fridays With Veronica

Are you tired of spending your hard earned money on totally boring things like insurance, taxes, RRSPs and toothpaste? 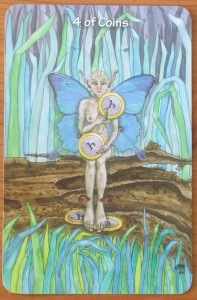 The Four of Coins nymph is here to suggest that you start spending your cash on the things that matter – lavish dinners, theater tickets, Turkish towels and gigolos!

That is what money was made for! Not all this boring shit that seems to consume 100% of your income. Good God!

Some people think the Four of Coins (aka Four of Pentacles) is about being cheap or feeling the need to pinch pennies. But it’s not!

Its about feeling pissed off that you have to spend so much money on totally pointless stuff that brings you absolutely no pleasure whatsoever. Like spending tons of money on a modest, unsexy car….so you can drive to work everyday.

In the comments below, tell me what one awesome thing you are going to spend your money on this weekend….and please don’t say “penny slots” or Doritos. Fuck!